Microbiology and married life do not go hand in hand

Once upon a time, there were the Lederberg’s, a couple of microbiologists whose work in the 1950s helped define the classical era of molecular biology. 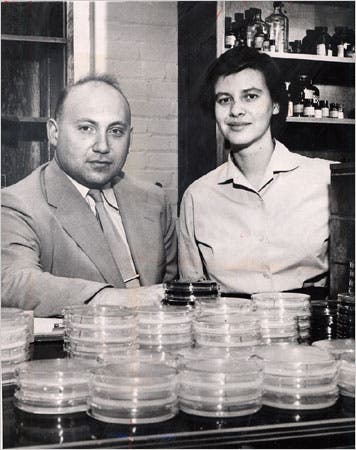 Joshua Lederberg, the eldest son of an Israeli immigrant family, had always been attracted to scientific research. For his barmitzvah, he received the book entitled “Introduction to Physiological Chemistry”, reinforcing his vocation. He then went on to study Medicine at Columbia University.

Esther Zimmer comes from a modest Jewish family in the Bronx and had a great thirst for learning. During her studies at Hunter College in New York, she studied biochemistry and later earned a master’s degree in genetics at Stanford University. It was during this time that she met Joshua and married him a few months later, in 1946. They both went on to the University of Wisconsin, the starting point for several years of fruitful collaboration.

Joshua gradually became recognized as a brilliant thinker with revolutionary ideas, while Esther was tagged as an expert in methodology, developing experiments in the laboratory to bring out the discoveries that both spouses shared over the years. They published articles, together and separately, on how bacteria can reveal “the chemical events on which all life depends”. Hard was to think that their work would revolutionize bacterial genetics.

In 1946, they discovered together conjugation, thanks to work on E. coli mutants showing that bacteria of the same species can exchange genes with each other without reproduction.

Esther, from her side, discovered during her doctorate the phage lambda in E. coli strain K-12. It was 1951, and the whole team immersed itself in the world of Lambda. This led to the discovery of a fundamental element in bacterial sexuality: The Fertility factor, as well as the emphasis on transduction. Subsequently, the team showed that the acquisition of resistance to certain toxic substances can be transferred from one bacterium to another. A major discovery had just been made, that of extra-chromosomal genetic particles capable of being transmitted and replicating autonomously: Plasmids.

At the same time, the Lederberg’s developed a particularly important technique in microbiology: bacterial culture replication, which allows a perfect copy of colonies to be made in a Petri dish, thanks to a velvet buffer. The couple also used this method to show that mutations occur randomly in evolution rather than because they are necessary.

The year 1958 was the year of consecration, marked by Joshua winning the Nobel Prize in Medicine for his work on bacterial gene exchange, which transformed the bacterium from a biological curiosity into an indispensable tool for genetic analysis. Due to sexism, Esther was marginalized and not officially rewarded during her lifetime, whereas her independent contributions were decisive for many of her husband’s discoveries.

Joshua was later invited to head the genetics department at Stanford, while Esther was offered a research associate position in another department. They divorced in 1966, as the science of “bacterial sexuality” had failed to keep the couple afloat.

Thus, the work of the Lederberg’s paved the way for genetic engineering and its full potential, although Esther’s contribution unfortunately remained in the shadow of the laboratory.