DNA, or deoxyribonucleic acid, is a macromolecule present in almost all cells and in some viruses. DNA contains all the genetic information that allows the development, functioning and reproduction of cells and organisms as a whole.

Deoxyribonucleic acid is made up of two antiparallel strands wrapped around each other to form a double helix. DNA is said to be double-stranded. Each of the strands is composed of nucleotides, each of which includes a nitrogenous base: adenine (A), cytosine (C), guanine (G), or thymine (T), a phosphate group and a deoxyribose. These nucleotides are connected to each other by covalent bonds between the deoxyribose of one nucleotide and the phosphate group of the next nucleotide, forming a chain.

Between two parallel chains, adenine and thymine pair via two hydrogen bonds, while guanine and cytosine pair via three hydrogen bonds. It is this pairing between the two complementary strands that forms the characteristic helical structure of DNA.

The order in which the nucleotides follow each other along the strand constitutes the DNA sequence, which carries the genetic information. This DNA sequence is structured into genes that are expressed by their transcription into messenger RNA. These are then translated into proteins by the ribosomes.
The succession of nitrogenous bases in the DNA determines the succession of amino acids that make up the proteins that are produced. This correspondence between nitrogenous bases and amino acids constitutes the genetic code while the set of genes of an organism represents the genome.

RNA, or ribonucleic acid, is a macromolecule present in almost all cells and in some viruses. Different types of RNA are found and fulfill various functions.

Ribonucleic acid is a linear polymer formed by a sequence of nucleotides. Each nucleotide includes a nitrogenous base: adenine (A), guanine (G), cytosine (C), or uracil (U), a phosphate group, and a ribose. These nucleotides are linked to each other by phosphodiester bonds. Uracil has the same base pairing properties as thymine with adenine.

RNA is produced by transcription from DNA by an enzyme called RNA polymerase. Thus, RNA is a copy of a region of one strand of DNA.
There are many families of RNAs, each with a particular structure or function.

Messenger RNAs (mRNAs) serve as a template for protein synthesis; they are the intermediaries between genes and proteins.

Ribosomal RNAs (rRNAs) are part of the ribosomes alongside ribosomal proteins. 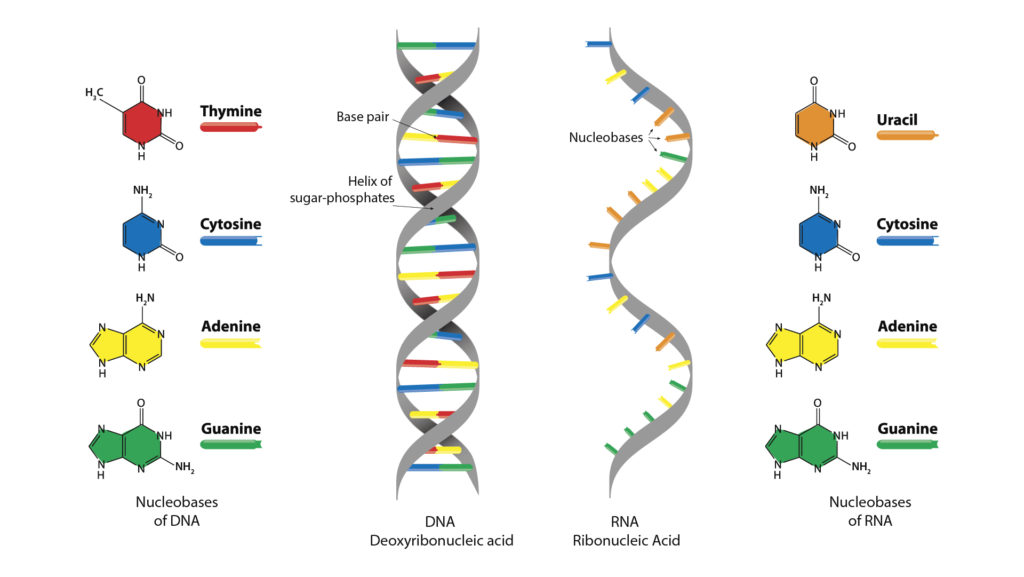