But who killed the bicorn?

Once upon a time Helicobacter pylori, a Gram-negative bacillus responsible for most of stomach cancers, whose the fine invasive strategy defeated another strategist, the Emperor Napoleon
Bonaparte. Let us return to the subtle modus operandi set up by this mobile bacterium to intrude into the human digestive system and play a major role in the development of stomach ulcers and tumors. 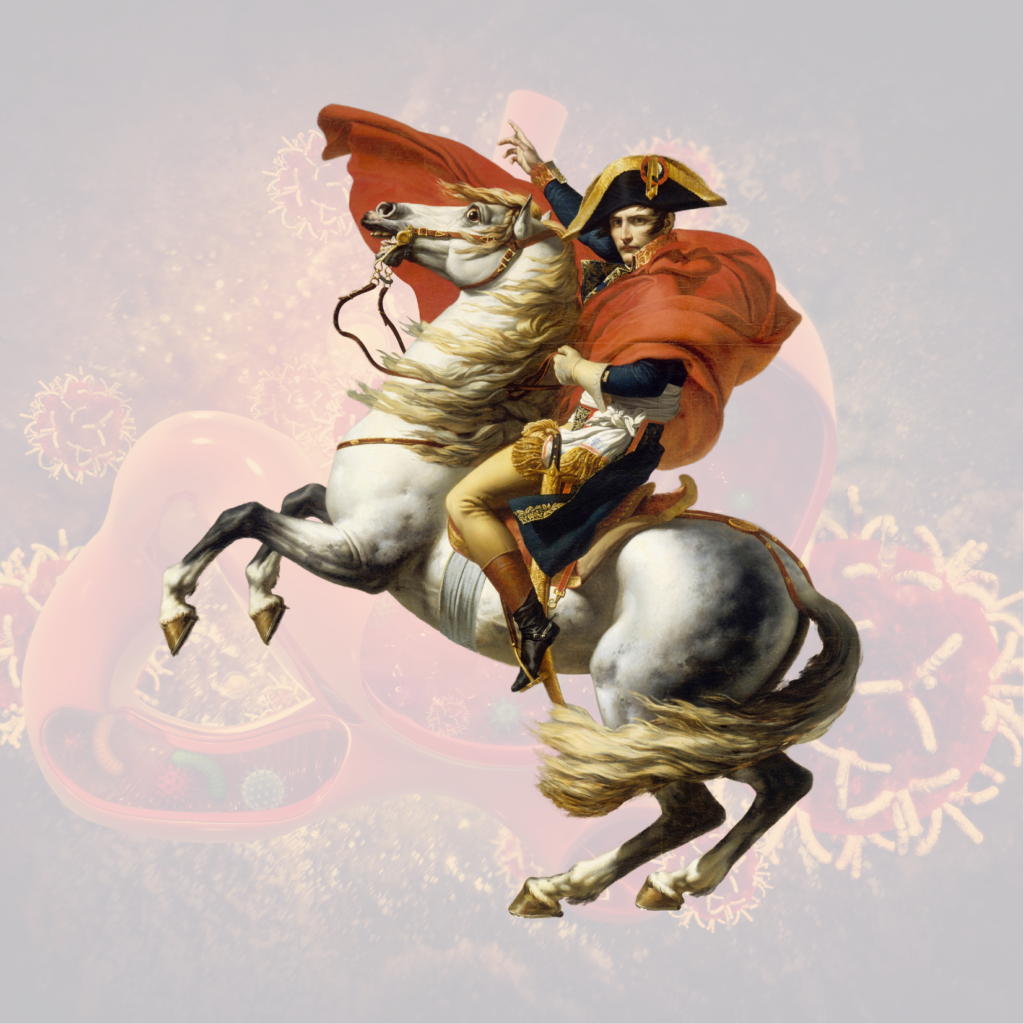 As a human pathogen, H. pylori colonizes the inner lining of the stomach where it nests. Its helical shape and flagella allow it to “slip” through the stomach mucus and anchor itself to epithelial cells through its adhesins. Sensitive to the acidic environment, it secretes urease that will transform the
local urea into ammonia, thus partially neutralizing the gastric acidity. Unfortunately, ammonia is toxic to the epithelial cells, and will, together with other secreted molecules , damage their surface. In addition, some strains harbor a pathogenicity island cag and produce the CagA oncoprotein and a
secretion system responsible for translocation of this protein into gastric cells. This results in the development of a chronic inflammation, called gastritis, which persists as long as the bacteria are
present. Over time, the infection can progress to digestive disorders and ulcers, and more rarely to stomach cancer.

Colonization of the stomach by H. pylori is common, affecting almost the half of the world’s population. It often occurs during childhood, when bacteria are transmitted orally, usually between
parents and children or between siblings. However, despite its high incidence, gastritis usually goes
unnoticed. The infection is therefore said to be asymptomatic. Only 10% of those infected will develop an ulcer and 1% will develop stomach cancer.

Among the potential victims of H. pylori, one of the most famous is the Emperor Napoleon Bonaparte. He died on May 5th 1821 at the age of 51 on the island of Saint Helena, and the results of
his autopsy four days later confirmed that the native of Ajaccio had died of stomach cancer. Autopsy reports by the Emperor’s personal physician, Francesco Antommarchi, and English doctors, showed an “ulcerated lesion” with “irregular edges” over ten centimeters long in his stomach wall. In 2005, pathologists stated in the scientific journal Nature Clinical Practice Gastroenterology and Hepatology that the anemia suffered by the Emperor was caused by a gastrointestinal hemorrhage associated with chronic gastritis due to H. pylori, favored by a diet preserved in salt, as well as by a genetic predisposition.

Before the accidental discovery of H. pylori and its role in gastric ulcer by Australian researchers J. Robin Warren and Barry J. Marshall in 1982, this inflammation was the consequence of lifestyle and stress. Stomach ulcers were then treated with drugs that neutralised stomach acid or reduced its
production. Although these therapies were successful, the ulcers very often reappeared. Since then, the involvement of H. pylori has been demonstrated in 90% of duodenal ulcers and 80% of stomach ulcers. Appropriate antibiotic therapy can then eradicate the bacteria, cure the disease and prevent
relapses. This discovery was awarded the Nobel Prize for Medicine in 2005 and allowed for the first time to demonstrate the role of a bacterium in a cancerous process.

However, misconceptions die hard, and in common parlance, people will probably continue to say to
someone who is anxious or stressed, “Watch out for your ulcer! “